Interview with the next Guild President: Harry Anderson

When asked how it feels to have been elected as President of the Guild, Harry replied that the victory hadn’t quite sunk in, though that after the bureaucracy begins he would probably wake up to it. Harry Anderson, Guild President Elect, had taken a few minutes off his studies to come and talk to me in the Sydney Jones coffee shop. Dressed casually, he was energetic but I could see that work had caught up with him.

Most people should recall Harry’s three main policies: to have lectures uploaded to VITAL as audio, to keep Wednesday afternoons free and to develop the Guild building as a place for socialising. Before I asked my first question I mentioned that he had probably forgotten speaking to me outside the library a few days before, ‘No, I remember.’ he said, sagely.

Harry responded to some concerns that I raised about the feasibility of keeping Wednesday afternoons free – he informed me that this was already guild policy, and that he would continue it. Moreover, he wanted to extend the policy, encouraging the University to keep the Wednesday mornings free, too.

Harry added another tentative proposal, that he would seek to have LSRadio played in more locations – this is not as firm a promise as his manifesto points. Likewise, he wants to provide more funding to nurture the University’s Ellipsis magazine for literature.

Having outlined some policy, the conversation moved to the issue of issues: Free Speech. Harry, affirmed that he is in favour of free speech in general, but that certain cases necessitate restrictions upon it. He is in favour of the ‘No More Page Three’ campaign to ban the Sun from being sold on campus, however. I hope that, if the Sun is banned in Liverpool University, that it will make people happy to know that the authorities are there to protect them from what they shouldn’t read on campus.

We talked, also, about how the mayoral debate was cancelled in 2012 because the University feared that students would be at risk from a ‘variety of factions’ if a BNP member were to speak on campus. Harry also mentioned that hate crimes on campuses generally go up if a ‘hate’ speaker visits – as such, he stood by the Guild’s actions in curtailing free speech in this instance.

You may remember, dear reader, when Mufti Ismael Menk caused upset when his tour of Britain would have brought him to speak at the Liverpool University. Because of his homophobic views (combining dark-age morality with prose of a 21st century squalor) the LGBT+ Society said that if the Guild to permit him to speak, they would protest at the event. Ultimately, the Menk’s organisation cancelled the tour.

Harry mentioned that he was in and around the guild apparatus at the time of the controversy as chair of the Labour Society. One of the Labour Society’s ‘liberation officers’, this one representing LGBT+ students, approached him and questioned whether it was correct to host Menk on campus.

Harry explained how he and the liberation officer met with Guild people who said that they would impose restrictions on Menk’s visit to alleviate concerns – this meant that Menk would have had to deliver a vetted speech and would not be allowed to run a Q&A session. The Guild would also have inspected students ID cards at the event. This way we could’ve been sure that Menk wouldn’t say something that he shouldn’t.

Harry said that, were he faced with a similar situation, he would handle it similarly. I challenged him on the fact that the event was voluntary and, as such, any student who thought that they might be offended could avoid it. I added that, in my opinion, the best way in which to change minds would have been to allow Menk to deliver a totally inflammatory speech, and then for him to be demolished in conversation and prose.

Harry replied that, while he is for free speech in general, having such views espoused on campus risked causing friction among students, especially with respect to LGBT+ and Muslim members of the University. He added that he and others would not have been happy for Menk to have expressed his hateful views on campus, per se.

I raised the issue of ‘No Platform’ with Harry; this is an NUS policy which stipulates that universities should not host speakers which are racist, fascist or otherwise extremist. Sam Butler, current Guild President, when asked, said that the University of Liverpool does not enact this policy, preferring to make its own judgements. However, the Guild did choose not to support a Debating Society event for the Police Commissioner elections because one of the candidates represented UKIP. Harry said that, were he in charge, this event would have gone ahead if he were sure that students would be safe.

Harry would not enact No Platform, being in favour of free speech wherever possible, he thought that it would be best to moderate such events on a case by case basis. This approach, he said, had not caused any problems thus far. He emphasised, moreover, that the decision-making process around such events should be open, and the criteria that the Guild use should be make available to people.

During the Guild election, the voter turnout was 14%.

Harry said that he was personally infuriated by the state of affairs during the vote – you will remember that the University instituted a system wherein students had to register to vote (which would not have been so bad if their data was correct). He added that he hoped to have things changed so as to make it difficult not to vote – such as introducing reminders when students log on to the university website.

Harry was concerned, given that some of his policies involve significant changes, that the University could use the low turnout to claim that he has an insufficient mandate. He is already considering ways through which he can connect with the student body, such as through online petitions, in order to re-enforce his level of support. He is particularly keen to set up a petition on recording lectures as podcasts – a policy which has received an enthusiastic response from students.

Harry is a member of the Labour Party, he explained how most of his family is broadly on the left and that he felt that ethos, though without any revolutionary fever. He added that his family taught him the value of working together as a community, rather than focussing solely on material advancement. This ethic, he said, causes him to favour the underdog and people who are poorly represented in the current system.

I asked about music, Harry enjoys many bands from his home city, Sheffield, like the Arctic Monkeys and Pulp, alongside giants like The Clash, The Beatles. Being eclectic, as he put it, his taste doesn’t exclude much else.

Harry is studying History and Politics in his final year, I asked where he thought that this would take him. His response: not politics. The campaign for Guild President, he said, had taught him a lot about himself, and he feels now that he probably doesn’t want to do that sort of campaigning for a living. He wants to change society for the better, though, so he suggested that working with charities might be a sufficiently non-political career through which he can help people.

Harry has worked for Age Concern in Luton (Age UK, for the rest of the country) – this was an enlightening experience, he said: pensioner poverty and loneliness are well-known and publicised problems, but it is hard to actually understand them without actually meeting people in that situation. Harry and others helped to set up a ‘buddy scheme’ which put elderly people in touch with people who could offer support and company for those who would otherwise have been lonely.

His work also included re-branding the charity and re-designing their website. This required Harry and others to approach businesses in Luton, asking them whether they could help with the process. He described how they wanted to involve a local company called Clearhead Media, though people in the charity were sceptical about whether they would be interested. However, Harry and the team dressed up in suits and went to Clearhead’s hotshot offices – they were impressed and agreed to help with the website.

I asked Harry which period of history was the most important for him, with respect to his left wing ethos. The inter-war period most interests him the most; these decades were dominated by ideology, he said, but it was during this period that the ideas which would form the post-war consensus develop: that people can improve their lives through collective action.

I mentioned William Beverage, Harry admires him as the man who exceeded the role which was given to him and changed our understanding of society.

Joe Strummer is an inspirational musician for Harry (who doesn’t agree with all his policies), alongside Alex Turner and Morissey. He mentioned the importance of development in a band’s career, and how Alex Turner’s lyrics have evolved throughout the band’s releases, yet with a discernible thread which connects them.

Harry admires Dennis Skinner and Tony Benn’s passion as speakers, never abandoning their beliefs. His favourite Prime Minister is Clement Atlee, because of the society which he created in Britain, especially during such adverse circumstances. He admires Atlee’s attention to what the people of Britain wanted at the time (not socialism), being, thus, committed to social democracy and fairness.

‘It’s time for my final question,’ I said. 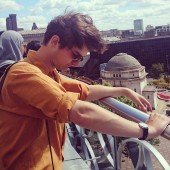 A second year at Liverpool, I study English and enjoy fiction, political journalism and music, among other things. I write politics and essays and blog at http://olivermeredithcox.wordpress.com.

250,000 join the ‘Carnival of Resistance’ against Trump