Ok, so here’s one that biologists, medics and engineers can get excited about.  It’s a fascinating little technique called DNA Origami. Its success, amongst ingenuity and oddity, is the fact that strands of DNA bind in such a predictable and reproducible manner.

What is DNA Origami?

DNA Origami is the folding of DNA into specific 3-dimensional shapes (and we’re talking shapes only nanometres in size). This can involve folding DNA extracted from viruses, which are then further held in place using crosslinking “staple” strands.

So what can DNA Origami do? Essentially there’s scope for a wide range of future applications, including molecular computing, nanorobots, medicine, art (there’s a wonderful paper on DNA dolphins, for example) and no doubt we’ll find many more things too.

However let me draw your attention to this particularly interesting (and dare I say, promising?) study published earlier this year in Acs Nano by Zhang et al (2014). Here, the team investigated the ability of one of these 3D DNA ‘’boxes’’ to deliver doxorubicin, an anti-cancer drug used in chemotherapy, to a tumour and how effective this is compared to conventional doxorubicin injections.

So why did they do this?

It’s a regrettable fact that chemotherapy is prone to complications and can cause a distressing accumulation of side-effects within a patient including sickness, hair loss and organ damage. It is therefore no wonder that there is continuous research looking into negating these effects, and Zhang et al’s study is no exception.

What did they do?

The study firstly designed a range of potential DNA Origami shapes which could hold and deliver the drug. After a series of tests they determined that a triangular box, 120nm each side (figure 1), was the most promising. Doxorubicin was placed into the triangle by soaking the box in the drug for 23 hours.

The study went on to induce tumour growth in mice. So what type of mice did they use and what was the nature of the tumours?

Tumour growth was initiated by injecting these mice with small amounts of these cells. The tumours grew after a time and the researchers’ experiment was then ready to begin.

Now, the experiment followed a very simple procedure: divide the number of mice (20) into 4 separate groups so that 5 are in groups A,B,C  and D and they underwent the following treatments:

A. Control group-This just means a ‘’blank’’ treatment was given.

B. Doxorubicin treatment- These mice have a standard injection of the chemotherapeutic drug.

C. Doxorubicin in a DNA box

What did they find?

The results indicated by Figure 2 show that the Doxorubicin-containing DNA box caused a significant reduction of tumour size in group C compared to group B, both of which were given standard doxorubicin injections.  Tumour sizes were monitored by measuring the intensity of the luminous tag using a special lens. No changes in tumour size were detected in the Control or empty DNA box groups.

The very environment of the tumour aided in drug release. Much like the lactic acid that builds up in your legs when running, the same process occurs in tumours. This actually benefitted the treatment as the acid accelerated the release of doxorubicin within the tumour region.

Were there any nasty side effects? No.

The researcher found that group D (DNA box only) showed normal levels of White Blood Cell, Red Blood Cell, or Haemoglobin levels within the blood-so the DNA box doesn’t seem to affect anything there. There also seemed to be no genetic consequences of the viral DNA box being introduced into the system, as there was no abnormal production or “expression” of genes caused by the DNA box. Of particular interest is the fact that significant weight loss was only observed in the mice receiving the doxorubicin injection, whereas in contrast no weight loss was seen in any of the DNA box groups or indeed the Control group.

So there we have it: a nice little study where the effects of a DNA box delivery system was compared to standard doxorubicin injection in 20 genetically identical mice with authentic human tumours. The results showed that the DNA box method was superior to standard injections. Persuasive, yes?  Well yes and no…let me explain:

Firstly, before I go on, I would like to make it clear that this is purely subjective judgement made by myself. Having said that, I reckon that some basic questions must be considered when weighing the results of this study:

Question 1) Were enough mice used? The entire study used the grand sum of 20 mice which were further divided into 4 groups of 5. This means all conclusions drawn were based on the DNA box delivery efficacy in five mice. Now five isn’t a big number: say I had a bag of different coloured skittles, and let’s say that I pick out 5 at random and they all happen to be red. This doesn’t mean that all the skittles in the bag are red.

Question 2) Are we sure the DNA box isn’t rejected by the immune system? Remember that the Nude Mice all have a reduced immune system. This is great as it allows human cells to grow on the mice without fear of rejection; however this also means that the immune system may not be working as it would in most patients if they were so tempted by DNA box treatment. It is not hard to imagine that a body with a more optimal immune system may respond differently to an injection of viral DNA.

Taking everything into consideration, I think this is an exciting paper with some intriguing results, as preliminary as they are, and I urge everyone interested to go and draw their own conclusions. However caution must be taken before getting too excited as there are still some questions concerning the solidarity of the results.

Fancy reading it yourself? 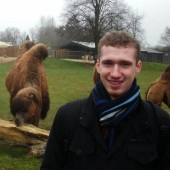 Currently studying for a Bsc in Biological Sciences. Interests within the sciences are varied, though genetics occupies the majority of his attention span.

Beware of the Highlighter!

Drug-testing kits for students in the fight against drugs