Brexit Britain: Our Country Taken Back, To The Dark Ages

The trustworthy trio of Gove, Johnson and Farage, who spearheaded the Brexit campaign, talked repeatedly of “taking our country back” prior to Britain’s decision to leave the EU on June 23rd. There have been some commentators who have had the audacity to refute this claim; but, in defense of the three amigos (nope, not the name of a Bee Gees, come Mariachi Tribute act), Britain has indeed been taken back: back in time, to a pre-Second World War Europe, where intolerance and economic insecurity are widespread.

It’s difficult to attach too much blame to the Brexit camp, however. It was impossible to know that the aftermath of a campaign centred on intimidation, fraudulent fabrication and Farage would foster so much hatred for the most vulnerable in society. Let us take just one example. It’s almost certain that Farage had good intentions when he launched UKIP’s now infamous ‘breaking point’ poster campaign a few days before the referendum. Where was the harm in posting emotive phrases next to an image of refugees, after all?

The EU has failed us all: yet 48 percent of the electorate voted to remain?METRO/REUTERS/Stefan Wermuth

There has been 41 percentage increase in reported hate crimes since the 23rd June, according to official Home Office statistics, but surely this is mere coincidence. Where is the evidence of Farage adding fuel to the fire of racial intolerance, or Gove telling tall tales about the 350 million extra funding we’d have for the NHS, after voting to leave? It’s not as if it was posted on the Brexit battle bus. What’s more, if we learnt one thing from Brexit, it was surely that we can no longer trust experts. The Home office figures are probably a lie, conjured up by Remain MPs, hell bent on maintaining ludicrous laws on bendy bananas.

Another amiable trend since the country decided to vote leave has been the apparent suspension of democracy, for all those who had the audacity to vote remain. ‘Brexit’ may indeed “mean Brexit” as Theresa May as told us repeatedly, since coming to office in July, but one curious phenomenon has coincided with May’s promises. Namely, that the right to freedom of speech for those who dare complain about Brexit should be taken away. As Cash, 41 from sunny Southend tells us on twitter “I am f***ing ill with hearing remainers moan about the state of things. Sort your f***ing selves out you spineless t**ts”. A charming way to put it, alongside a perfectly reasonable claim. Since we have now taken our country back, it should be to pre 1928, before everyone had the right to exercise their opinions.

You heard the man, how dare you exercise your democratic right to free speech!?

The motive for Brexit was to build a brighter future, away from the unelected bureaucrats of Brussels and the stupidly scrupulous sods in Strasbourg. It is to my absolute incredulity then, that so many scientists and students feel so subjugated after Brexit. Sure, British universities will no longer gain access to The EU’s wealth of research grants, but the billions can surely be found elsewhere, as promised by the three amigos. The Brexiters wouldn’t lie to us, would they? Perhaps Farage will magic the cash from a hat (or use the money received for advising the equally progressive Donald Trump). He was, after all, the chief mastermind behind the successful escape from the institution that dared to fund our brightest brains.

Brexit Britain then will be a brilliant Britain, without a shadow of a doubt. We have much to thank the three amigos for. Farage should be placed on the New Years’ Honors list, for all his wonderful work, for ‘taking our country back” from the Brussels bureaucrats and into times of such economic security and delivering unprecedented levels of social cohesion. Boris Johnson clearly cares greatly about Britain, never using Brexit as a means to springboard his own political career. Michael Gove continues to be a bright beacon in British Politics. A pride of Britain award for Michael would be duly deserved, for both his work as education secretary and on Brexit. Gove, lest we forget, has the absolute admiration of teachers, from Alnwick to Ashby. The three amigos and passionate campaigners like Cash from sunny Southend deserve our utmost admiration, for Brexit has truly taken our country back. 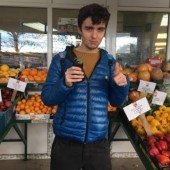 The Windows Project: A Resource for Creative Writers

Why Jim Halpert Represents Everything Wrong In The World