“We shall meet in the place where there is no darkness…”

Directed by Leanne Jones and Emma Whitley, this play is very much true to the original text, telling the story of Winston Smith, a member of the outer party who works in the Ministry of Truth, re-writing and distorting records of the past, whose desperate struggle against the immersive and tyrannical ‘Big Brother’ society in which he lives leads him to commit a simple and yet a foul crime: starting a diary.

In a world where your every move is monitored by telescreens and ‘two minutes hate’ is an obligatory activity, Winston finds hope in his fundamental belief that the proles, those lowest in the social order of his world, free to act as they choose, hold the key to bringing down the ‘party’ and Big Brother. His illicit affair with Julia, a Fiction Department worker is Winston’s ultimate rebellion against the party and offers one of the most iconic stories of love and betrayal to be found in literature.

Lee Burnitt’s performance as Winston is undeniably what makes this particular production. With his low, penetrating voice, gaunt physicality and commanding presence, Burnitt’s Winston stole the show, offering a portrayal of a humble, quietly frustrated Smith, made all the more powerful for being so. His downcast expressions and undercutting tone spoke louder than a Winston played as brash and over-emotional ever could. This is a long-suffering outsider being presented by Burnitt, a man repressed, whose only hope is for his own demise to spark rebellion in the next generation.

Christine Heaney’s Julia, a bright-eyed, affectionate lover provided a sharp contrast to Burnitt’s Winston and although well acted, left something to be desired in its simplicity; surely Julia would share Winston’s anxieties about the potential for their affair to be discovered and yet seemingly, from this portrayal she has none. More depth in the portrayal of Julia would have been beneficial for the dynamic between the two principal characters of the story.

The wider cast, including performances by James Price and Sara O’Connor as Mr and Mrs Parsons, really gave body to the narrative and added to the success of the play, rather than filling space in the production as is often the case with those dominated by two main characters and their relationship.

Finding a home in Constellations during its run, this production’s power is harnessed by its’ adept use of staging. The action of the play takes place in a runway type-space between two adjacent audience galleries, allowing for the audience to engage with what’s happening directly in front of them in an incredibly unique way.

When the characters gather for startling ‘hate’ scenes and a public hanging, the audience’s physical proximity to the action makes them a part of what is taking place on stage. People in the front row would only have to stand in order to become part of the party faithful professing loyalty to Big Brother or those spitting hate and venom at ‘traitors’ who step out of line.

This intense staging is made acutely obvious during a guttural sexual encounter between Winston and a prole prostitute for which the audience become awkward onlookers. In the absence of the telescreens in the prole area, the audience itself becomes the mode of surveillance of Winston’s activities assuming the Big Brother role. We see all, even if the screens do not, and this makes for one of the play’s most poignant scenes.

The use of live music from local artists Ste & Vicky (The Mono LPs) and Thomas Thompson throughout the performance is not to be understated either, this builds on the staging intimacy and adds dramatically to the overall effect of the play.

Despite issues with the simplicity of Julia within this production, TellTale Theatre’s ‘1984’ is nonetheless a fantastic portrayal of the timeless novel, which draws on the greatly disturbing elements of the original but also offers an intimate, chilling experience of the events of the story in how it has been staged. Enjoyable and engaging, this play is a great example of the quality Liverpool theatre has to offer audiences. Or, as they say in Newspeak, it’s ‘double plus good’. 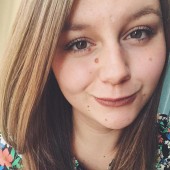 Arts and Culture Editor at the Sphinx. Third year English and Politics student. I have an avid interest in British and American politics and enjoy good literature, theatre and film.