A University of Liverpool-led clinical trial has shown that 29 per cent of pancreatic cancer patients given a combination of two chemotherapy drugs lived for at least five years, compared with 16 per cent who received the one chemotherapy drug. The Liverpool trial has been labelled a “breakthrough”.

What is the significance of pancreatic cancer?

Pancreatic cancer is a disease in which malignant (cancerous) cells form in tissues of the pancreas. The pancreas (a small finger-shaped organ which sits underneath the stomach) is vital for everyday functions, but not everyone is familiar with the importance of the gland. Simply put, the main functions of the pancreas are to release enzymes to aid digestion and also to secrete endocrine hormones in order to regulate blood sugar levels.

In 2014, there were an estimated 9,618 new cases of pancreatic cancer in the UK, with 8,817 deaths (Cancer Research UK). This means that nearly everyone who got the disease also died within the year. Sadly, the symptoms are not always clear and are not all unique to pancreatic cancer, meaning it is often difficult to diagnose the patient until the disease may have become too advanced; metastasising to other organs. The ten year survival rate for this type of cancer (England and Wales, 2010-2011) was less than one per cent, compared to 78 per cent for breast cancer. Although the statistics are alarming, the risk is relatively low (one in 72). However, obesity and smoking double the risk of gaining mutations in genes, which may build up over time to cause the cancer.

Statistics generally show that the more funding a disease gets, the better the prognosis of the patient as they are more likely to survive from treatment. The graph highlights the extreme need of funding for pancreatic cancer, as it has been heavily underfunded in the past. Funding can come from the government, charities and partially from pharmaceutical industries. The mortality rate generally reflects the funding the disease gets for medical research, and although pancreatic cancer is one of the rarer cancers, it is also one of the deadliest therefore should not be ignored.

By 2030 pancreatic cancer is predicted to be the second most common cause of cancer-related deaths, and if people continue to smoke, possibly the first.

Over the last 40 years, pancreatic cancer has not shown much improvement in the UK. Around 20 per cent of cases of the cancer are resectable, and the clinical trial run by Liverpool has managed to increase the five-year life expectancy of patients by 18 per cent; staggering figures considering the statistics are so low in favour of survival. The trial was one of the largest ever conducted in pancreatic cancer and this amazing outcome provides a hopeful future for those affected and may be a starting point for increasing the survival rate even more.

The trial began in 2007 and was led by Professor John P. Neoptolemos, the chair of surgery in the Department of Molecular and Clinical Cancer Medicine at the University of Liverpool. It included 732 participants, half of whom received the intravenous chemotherapy drug gemcitabine, which is currently used to treat the disease; whereas the experimental group received two chemotherapy drugs in combination; gemcitabine and oral capecitabine. The five-year survival rate increased drastically from 16 to 29 per cent for those who took the combination of drugs. The addition of a simple, generic drug has managed to improve the patients chance of survival and has done so with little impact on quality of life.

“These findings are significant because they show that those patients who can undergo surgery, have a fighting chance of surviving this cancer with the combination of two commonly used chemotherapies” said Dr. Neoptolemos, adding “The difference in median survival may seem modest, but the improvement in long-term survival is substantial for this cancer”.

The results were first presented in 2016 at the American Society of Clinical Oncology (ASCO) and it is predicted that this treatment plan will double the number of patients who survive this disease for at least five years.

Purple lights for hope. To increase awareness of the disease, city landmarks lit up in purple to represent pancreatic cancer; this included St George’s Hall in Liverpool.

You can read the full study, published in the Lancet, here.

As funding is low for cancer research, every donation counts. If you feel like donating, please visit the Pancreatic Cancer Research Fund. 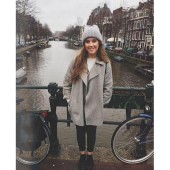 School of the Arts to host exam anxiety workshop

LightNight: The Liverpool Culture Crawl to Return for Sixth Year