As well directed and acted as it is confusing, The Ghoul will remain with you for some time after watching it – even if it’s just to figure out what on earth was going on!

The Ghoul is a fantastic cinematic piece and well deserving of its British Independent Film Award. Directed and written by Gareth Tunley, and containing the skillful, believable acting of Tom Meeten, Alice Lowe and Rufus Jones. At first, The Ghoul appears to present itself as an ominous horror thriller, the title of which does little to diminish this impression. However, after adjusting to the unsettling deviation from the plot’s stability, the primary emotion of the film instils a growing sense of disorientation. Rather than fear, horror, or even dread.

Tom Meeten plays the character ‘Chris’, a detective undergoing therapy. As his life begins to unravel and ensnare him and those around him, Meeten communicates this through his wonderfully troubled performance. Both ‘Chris’ and the audience are thrown head-first into a world of beautifully psychedelic and traumatic visuals, reflecting his character and guiding the plot.

There is no doubt the acting and cinematography are the highlights of the film. However, at times, the writing behind the film hits upon real issues in a sensitive and well thought-out manner. Certain discussions surrounding the nature and manifestation of depression, manage to avoid the ever-present threat of cliché. Any shred of development within the ever-changing plot becomes valuable, such as the reveal of the eponymous ‘Ghoul’. These instances deliver moments of calm amidst the confusion.

Unfortunately, the ending left no lasting impression. The expectation of a twisted climax that embeds itself in your mind was replaced by a widely telegraphed, simplistic narrative. The potential for complexity and ambiguity was side-stepped by a final reveal that only lasted a few, visually interesting seconds. However, this does not significantly detract from the film’s overall quality, but serves to be a minor flaw in an otherwise well-made and acted film with an (almost overly) convoluted plot.

Independent cinema and the work of the BFI and other institutions are crucial to the future of British Cinema; tickets and more information on BIFA and its nominated productions can be found here: https://www.bifa.film/independents 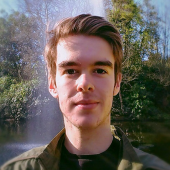