It’s hard to think of any other musical which defines Northern, working class culture as much as Billy Elliot. The musical, set against the backdrop of a north-eastern mining town in the 1980’s, typifies working class culture and identity at a time of complete change in British history, when upheavals in class and identity were beginning to emerge and divide the nation.

The search for identity was an unescapable theme in this production of Billy Elliot. However, this is meant in the best possible way, as the production and acting was so good that the musical went beyond the story of simply a Northern boy’s ambition and passion for ballet. It showed the search for self-identity, amongst Billy himself, but also in his own friends and community. Billy’s friend Michael begins to explore his sexuality and cross-dressing in a world which appears so intolerant and resistant to change, whilst the local miners face their own identity crisis, in the midst of the coal strikes of the 1980’s, being forced to adapt their way of life and ideas of working class culture in the midst of Margaret Thatcher’s governing.

One of the highlights of the night was in fact the 30ft effigy of Margaret Thatcher which opened the second half of the play. Surrounded by countless mini Margaret Thatcher puppets, the number swallowed up the stage, yet Maggie had not in fact been reincarnated from the deep, instead this was a scene from the local miners Christmas party, which displayed the real sense of disdain these communities had towards Thatcher and her government.

Most people have seen the film adaptation of Billy Elliot; it has become a cult classic set to the backdrop of 80’s classics from T-Rex and The Jam. The musical manages to maintain all the emotion and sentiment of life in a mining town in 80’s England, but instead replaces the film’s rock soundtrack for its own musical numbers which are equally as captivating. The cast and crew of the new touring production bought these to life with such vibrancy and energy that lasting applause was found after every musical number, with even the occasional standing ovation.

A lot of people are not a fan of musicals – they find them cliché or cheesy, yet Billy Elliot manages to combine the vitality and joyfulness of a classic musical with the grit and drama of a story that was reality for many people only decades ago. It truly is a musical for everyone, and a must-see during the final few weeks of term spent in Liverpool.

Billy Elliot is running at the Liverpool Empire until 27th May and tickets are available from £12. For more information click here. 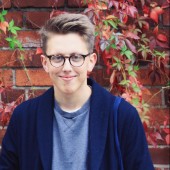 The Wombats: Your Body is a Weapon

‘Scouse: A Comedy of Terrors’ at The Dome – Preview