“But maybe it is better to choose evil than to have good forced upon you?”

This quote constitutes the main premise of A Clockwork Orange (originally  a novel written by Anthony Burgess in 1962 and later adapted into a film by Stanley Kubrick in 1971), that gained notoriety upon its release due to its controversial subject matter. In fact, the film was banned in the UK for many years due to death threats made towards Kubrick. Since then it has become a cult classic and is considered by many as one of the most influential films of all time.

A Clockwork Orange is set in a dystopian future where intimidating gangs of teenagers roam the streets at night and indulge in “ultraviolence” (a hobby that consists of beating up, and sometimes raping, innocent passers-by). One gang who are known as the “droogs” and led by Alex DeLarge are especially violent, eventually resulting in Alex being thrown in prison for his anti-social lifestyle. Whilst in prison, Alex volunteers himself to be part of a government experiment known as the Ludovico Technique, where prisoners can supposedly be reformed. As a big fan of the film I was intrigued to see how the story would translate onto the stage.

The production makes great use of the Everyman’s 360 degree stage, giving us a more intimate view into the sickening world of Alex and his droogs. In addition to this, a large portion of the dialogue is spoken in Nadsast, the fictional slang dialect of the droogs in the novel, which comes across as strangely Shakespearean in its delivery. The small cast of actors are incredibly talented, with many playing a wide range of parts. More than anything, this appears to be a cast who look as though they enjoy every moment of performing.

Much of the spirit of the dark humour present in the film is mirrored in the stage production; for example, the strict prison governor is replaced with a Muppet-style puppet and one prison sequence features an inmate heavily resembling Jimmy Savile. There is also a good amount of audience participation as spectators are encouraged to applaud as Alex completes the Ludovico Technique, and the Minister for the Interior, often deliberately misnamed by characters as “inferior,” makes no hesitation in commanding an audience member to “wash [his] hair!”

The vast majority of the music is performed by a very talented, live musician, this includes excerpts from Beethoven and terrifying ambient pieces. There are also many original songs written for the play, such as a rendition of Beethoven’s ‘Ode to Joy’ in which the lyrics are replaced with: “Do not be a clockwork orange, freedom has a lovely voice. Here is good, and there is evil – look on both, then take your choice.” The music is a fun addition to the overall performance and often acts as a catharsis to the intense scenes of ultraviolence.

The play doesn’t hold back on being as brutally shocking as the film either. One scene where the droogs torture and prepare to rape a woman proved incredibly uncomfortable to watch. I overheard one person at the interval, presumably a relative of one of the actors, say: “no wonder he kept quiet about the play!” I think this demonstrates that audiences who are unsure what to expect may find this play very shocking and, at times, hard to follow. However, those who are fans of the novel or film, as I am, are likely to enjoy this bold and entertaining adaptation.

A Clockwork Orange is showing at the Everyman Theatre until the 12th of July: https://www.everymanplayhouse.com/whats-on/a-clockwork-orange 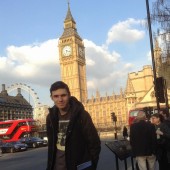