On 4th October, the Giants finally returned to Liverpool for their third visit and final visit.  It took the reporters almost 1 hour to get into the St George’s Hall to see the Little Boy Giant when he was “sleeping”. According to Giant Spectacular’s official website, 1.3 million people came to see the Giants in Liverpool and New Brighton. In the final parade on Sunday 7th October, the Little Girl Giant surprisingly showed up at Salthouse Dock, much to the delight of the waiting audience.

The Giant Spectacular was invented by Royal de Luxe, a French company. They have held an event for their puppets annually, each with a different theme. The chosen theme for the Giants last ever show was ‘Liverpool’s Dream’. This event marked the 10th anniversary of Liverpool’s widely celebrated European Capital of Culture title. Four giants “attended” the show: the Little Boy Giant, the Little Girl Giant, the dog Xolo, and the Giant. These Giants are well travelled having visited, amongst others, Reykjavik, Berlin and Chile. In the build up to their arrival in Liverpool, tell tale signs of the Giants appeared around the city centre. These included a split Arriva bus and a giant fork outside of St Luke’s ‘Bombed Out Church’. You see more of these photos here.

The Giant speculator was the first time that may students saw such a huge number of people in Liverpool, so it was understandable how excited and delighted people were. People of all ages came together to celebrate this last performance of the Giants and the incredible culture of Liverpool. Some young people even climbed a tree, while others stood on top of the bus stop to get a better view! It was an interesting and exciting event for both locals and foreigners, which will no doubt be remembered by all those who attended for years to come.

See a video summary of the Giant Spectacular here: 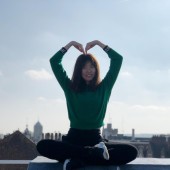