Despite continuous apologies to the audience that she was unwell, Liverpool- born Zuzu gave it her all, belting out her upbeat pop to the intimate venue of Jacaranda Records Phase 1 on Tuesday evening. The distinctive broad scouse accent drew in quite the crowd as Zuzu made her debut headline performance in Liverpool. Following the laid back, almost trance-like dream-pop of fellow Liverpudlians, Shards and the upbeat, jangly and often politically engaged Chester three-piece, Peaness, Zuzu took the stage with an air of ownership. She knew what she wanted to convey to the audience.

A bold start with strong unreleased material set the tone for the rest of the performance and the audience were encapsulated into Zuzu’s world of space-themed authentic pop and expressive melodies. Filling an unprecedented need for more unapologetic female artists, Zuzu’s electrifying enthusiasm is second to none and reflects on the audience’s reaction to her mesmerising performance.

In particular, recent single ‘Dark Blue’ gained an expressive applause from the audience, a song whose lyrics discuss the true realities of Earth and the trouble society has with expectation: “and your American dream came true, pray for a Hollywood ending, where the stars are all suspended, on a string”. The added layers of vocals from the rest of the band add depth and tonality to every song performed, evoking unity as a solid line up.

As did lead single ‘Beauty Queen’ from the EP Made On Earth By Humans, a self-reflective track showing the vocalist’s insecurities in the raw bridge lyrics “but I’ve got no chance, cos I can’t sing and I can’t dance”.. This insecurity, however, is quickly resolved by replacing the lyric “can’t” with “can” when referring to singing, this song in particular shows a self-assurance and confidence in her creative outlets – she’s embraced her enigmatic aura.

The set ends with the almost ballad-like track ‘All Good’, which as the title would suggest discusses feeling all good. Mentions of “alien aunties”, “dreams” and “planet(s)” along with the vibey, hollowed guitar sound link the track back to the space theme of Zuzu’s recent releases and create an identity for the performance and performer.

Zuzu’s enigmatic and flavourful lyrics left the audience hungering for more, that’s for sure.

Check out her latest EP Made On Earth By Humans here. 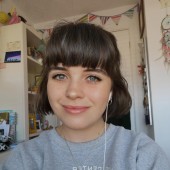